Yoga, propounded by Patanjali is the ancient Indian knowledge where one’s own consciousness (jivatma) reunites with universal consciousness (paramatma). In Sanskrit, Yuj means joining or to unite.

Yoga is also defined as the one that inhibits the transformation of mind and keeping the mind free from discursive thoughts.

The practice of Yoga focuses the mind and body in eliciting the relaxation response to relieve oneself from physical and mental stress and achieve equilibrium of the body, mind and soul. Union with this unchanging reality liberates the spirit from all sense of separation, freeing it from the illusions of time, space and causation.

Yoga is therefore regarded as a divine science of life, revealed to enlightened sages in meditation. First textual mention in the Vedas was corroborated by oldest archeological evidence of seals from the Indus Valley dating back to around 3000 B.C. The Upanishads that followed the Vedas provide the main foundation of Vedanta philosophy (that espouses the idea of an absolute consciousness called Brahma) and yoga teachings. Around the sixth century B.C. appeared the massive epic The Mahabharata written by sage Vyasa and containing The Bhagavad Gita. The Gita contains yoga terms and concepts to enable the reader face life similarly.

The backbone of Raja Yoga is furnished by Patanjali's Yoga Sutra, thought to have been written in the third century B.C. The classical text on Hatha Yoga, the Hatha Yoga Pradipika which describes the various asanas and breathing exercises which form the basis of the practice of modern yoga, was compiled much later by a yogi named Svatmarama.

In the modern perspective, Yoga is one of the most effective and wholesome forms of experience to control the waves of thought by converting mental and physical energy into spiritual energy. Yoga eases away pent-up tension, rejuvenates the body and soul, enhances concentration, cures diseases and keeps a hold on the aging process. The physiological and psychological benefits rewarded from Yoga make it an inevitable element in spiritual and secular healings. 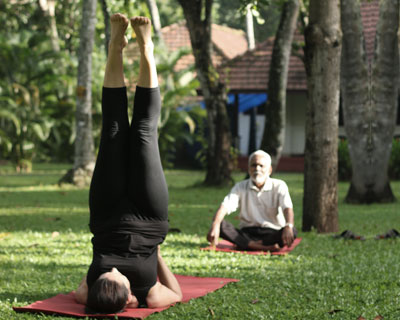 Pranayama otherwise known as Breathing Exercise has its origin from two Sanskrit words, Prana meaning breath and Ayama meaning exercise. This system of Yoga was earlier mentioned in Bhagavad Gita and was later seen to be practiced by Hatha Yoga followers. A comfortable sitting posture is recommended for its practice though Padmasana (Lotus Position) is told to be the ideal posture. It mainly benefits in rewarding good sensual perception and spiritual awakening as it involves controlling the movements of Prana Vayu ( air located in head) and Apana Vayu (air located in lower abdomen). The process of slow air inhalation is called Puraka, air that is inhaled is then withheld in the throat known as Kumbhaka and finally it is exhaled slowly which is called Rechaka. This Pranayam practice is to be performed in the morning hours (before or after Sun rise) on empty stomach which helps in enriching the blood with oxygen thereby energizing the whole body systems. It is told that this practice in turn helps the respiratory volumes and cleanse the body channels.

One who practice Surya Namaskar is bound to live a healthy life without miseries. This practice of Yoga is done facing the early morning sun rise which benefits the individual in many ways both physiologically and mentally. The movements and breathing techniques adopted in the eleven postures of Surya Namaskar improves blood circulation, body metabolism, flexibility of spine and other joints and concentration. 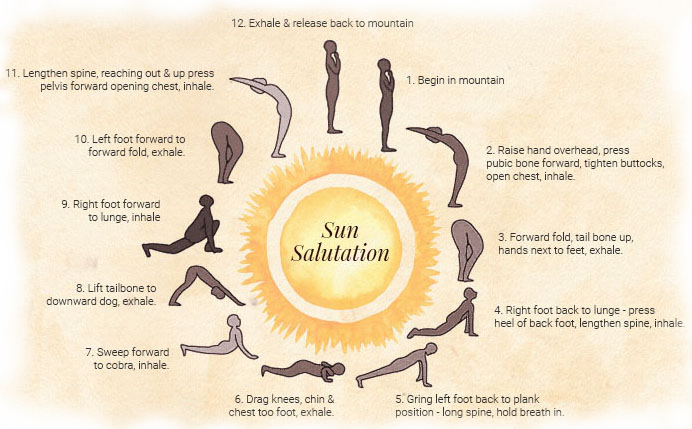 Asana in Sanskrit defines seat or sitting posture. Patanjalai has termed Asana as one among the eight components of Yoga where one can hold a posture for extended period of time by staying relaxed, steady, comfortable and motionless. The posture that causes pain or restlessness is not a yogic posture. In Yoga, there are different positions that are manoeuvered to increase the flexibility, strength and balance of body.

Join our subscribers list to get the latest news, updates and special offers delivered directly in your inbox.